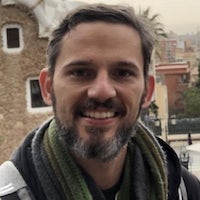 A few days ago, I received an email from a newsletter showing a step-by-step guide to deploy a Ruby based lightweight web framework on Docker. So, it gave me the idea to try it but with a more familiar tool, the good old Python. Also, instead of deploying the app to Docker, I’ll deploy it in a container in some cloud services (which I'll share on a later post).

The idea for the API

A lot of different tutorials about deploying Web frameworks in containers show how to deploy a web equivalent of a ‘hello world’. I thought that this time I should try something completely different*.

After looking a while for ideas to develop an API, I found a precious little dataset on Kaggle: The Monty Python Flying Circus dialogue dataset! I have found my Holy Grail*!

I decided to code an API with two endpoints. One that would return a random dialogue from the original show. And another endpoint to try to create, using Markov chains, a new material based on the original dialogues.

The first endpoint was straight forward just using SQLAlchemy to fetch the data from the db file and return the json to the request. Cool!

The second part of generating a new dialogue was a bit tricky, because even for Monty Python's standards it was pretty crazy random! You have to keep in mind that the prediction model is using texts from dialogues with different number of people, and Monty Python’s dialogues are as nonsense as it can be. Thus I decided that I needed to adopt, adapt, and improve (motto of the round table)*.

I downloaded the US president speeches corpus and mixed a random speech with a random Monty Python dialogue! Now the material was pretty close to what you would hear from a Monty Python’s mock political speech (or from some deranged politician).

The very first step in any Python project should be creating your Python env. Different projects use different libraries, and it is a good idea, in terms of cost and security, to keep your containers with as little dependencies as possible.

The libraries I used:

The folder structure is:

To generate the requirements for your container you can just run:

The complete code is available at the repo, but I'll go quickly over the main files:

We import flask and flask_restful libraries, and the resources where the endpoints will direct the requests to.

We then add the boilerplate code to pass the configs to Flask and the DB file do SQLAlchemy.

Now we add the endpoints do their respective resources and run the app.

This is the file that generates pythonic political speeches:

We import the Resource from flask_restful, random, markovify and the models that abstract the access to the DB.

We randomly choose a dialogue with at least five exchanges of lines.

We randomly choose a speech from the +1000 speeches available and concatenate it to the previously chosen dialogue.

We train the Markov Model with the text, and then create 1-to 30 new sentences based on the trained model.

It returns the json with some data used to train the model and the resulting speech!

This is boilerplate code to access the data from the db file. We need to specify the tablename, the columns and a function to fetch the data by some specified criteria. In this case, the index of the speech.

Lastly the wsgi.py is used by gunicorn to run the flask app.

Great! Time to set up the Dockerfile.

This part is fairly easy. There is a lot of resources with 'recipes' to create your Dockerfile for simple Python apps like this. You just need to copy the files to the /code directory in the container, install the libraries and run the app:

I added the '$PORT' environment variable to be able to deploy it to some cloud services. Some services, such as Heroku, the port number is managed by them. So you need to leave the env.var in the dockerfile.

If you would rather just use Flask instead of using Gunicorn, you would need to change the last line to:

Now, we test it Postman or a browser:

Oh president Harding, I thought you were so rugged!*

Great! Now I have a very silly lorem ipsum generator to use on other projects! And the fact that it is already dockerized, it can be readily deployed on any cloud provider such as Heroku or AWS ! I hope this post has made you smile! :)